This year Hope was apart of another amazing robotics team. Her position was Team Captain and Lead Programmer, which became an amazing opportunity to grow her leadership skills.  They all worked together like a well-oiled machine and at the end of the year all their hard work paid off when they competed at Oklahoma’s Vex State tournament and won the Excellence award, which is the highest award presented in the VEX Robotics Competition. That award qualified them to compete at the Vex’s World and National competition.  At Nationals they were the Mega Alliance Challenge Finalist and at Worlds, they placed in the top 20 of their division. 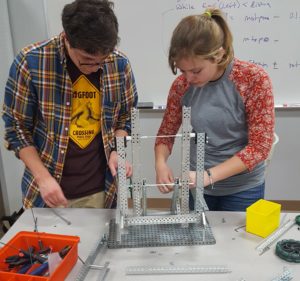 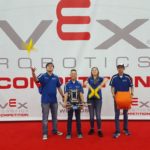 At competitions,  Hope’s team wanted something that would help them stand out from the other teams so they made information cards (business cards) to pass out and created a PowerPoint to be showcased at their booth. Also at Nationals and Worlds, they passed out team buttons that we had made a string backpacks with our logo on it to try to get our team number known.